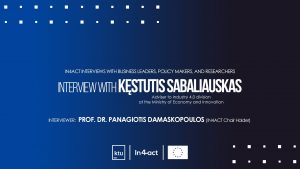 In recent years, Industry 4.0 has been one of the most popular terms in the technology sector. Many companies are trying to adapt this concept in their work, while public policymakers are attempting to develop strategic plans to speed up its process.

Therefore, during the discussion with prof. dr. Panagiotis Damaskopoulos, the head of Kaunas University of Technology School of Economics and Business and ERA Chair project “Industry 4.0 impact on management practices and economics” (IN4ACT), Senior Expert at Industry 4.0 Policy Division at the Ministry of Economy and Innovation of the Republic of Lithuania Kęstutis Sabaliauskas revealed what is being done to make Lithuania a leader in Industry 4.0. 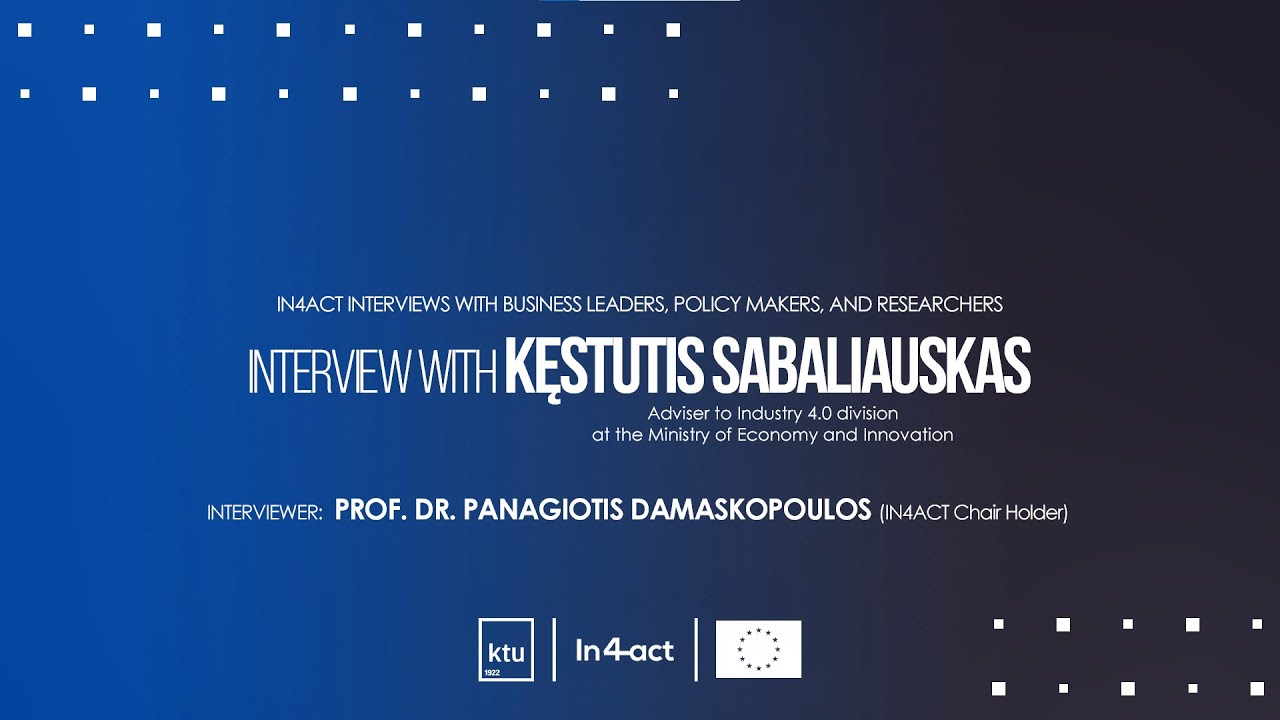 Lithuania – in the middle of the digitalization ranking

Talking about the current state of Industry 4.0 in Lithuania, K. Sabaliauskas notices that the perception of the situation depends on the point of view. If looking at geographical neighborhoods, Lithuania could be defined as the champion in this area. However, according to “The Digital Economy and Society Index” (DESI) Lithuania ranks 14th among the 27 European Union countries in 2021.

“According to this index, Lithuania is a medium performer in terms of digitalization. We are performing quite well in digital public services and connectivity, but we are lagging in human capital, especially in ICT specialists. Despite that, over the recent years, a lot has been done to stimulate the digitalization of the economy by injecting companies with technological know-how and financial support. We have also encouraged companies in increasing their cooperation, sharing, and networking by facilitating the operation of clusters and supporting digital innovation hubs”, says Senior Expert.

According to K. Sabaliauskas, the major current and upcoming challenges of Industry 4.0 initiatives in Lithuania are to implement all the targets of the European strategy. He notes that these challenges are related to the circular economy, the greener industry.

“In the beginning, these principles did not seem very attractive to the companies or investors. But now we are working on some strategic planning to improve this situation. Our plan consists of a roadmap for Lithuania’s transition to the circular economy. It will provide the program of implementation of new transformative production methods, and it will also envisage the ways how to decouple economic growth from extensive use of raw materials and industry resources. We also aim at increasing productivity, transition to a climate-neutral economy, creation of efficient secondary raw materials market, and product design. So, this is the vision of making the future economy greener, but it will also be based on the innovations we have achieved through digitalization”, says the representative of the Industry 4.0 Policy Division.

“The educational system in Lithuania seems somewhat traditional. While Industry 4.0 is disruptive, meaning it is fast and challenging. Therefore, one can tell that there is a gap programmed in this area. To put it more vividly, it’s like one is taught to waltz when in real life he has to breakdance because everything is changing so fast. So, I believe that professional guidance should start as early as possible, also I believe in lifelong learning”, says K. Sabaliauskas.

Senior Expert believes that an important role in facilitating the transition to Industry 4.0 in Lithuania is played by public policy. According to him, public policy is something that eventually brings financial support to the companies. However, to achieve this, he says it is necessary to have a neck, a mechanism, or a tool that implements the political decisions and guidelines into action.

“We have an Industry 4.0 competitiveness platform in the Ministry of the Economy and Innovation. It consists of a high-level competitiveness commission, chaired by the Ministry of Economy and Innovation, a coordination group, and six working groups. This platform works as a pyramid. At the bottom, we have six working groups of experts in various fields. They discuss important issues and make suggestions to the coordination group, which develops motivated and consolidated proposals for the commission’s approval”, says K. Sabaliauskas.

Finally, K. Sabaliauskas talks about additional issues, which Industry 4.0 in Lithuania should be addressing. He repeats that the biggest challenges Lithuania is facing now are the circular economy and greener industry. Therefore, to improve the situation, a project called “Industry 4.0 LAB” has been set up.

“The result of this project will be two or three virtual simulation labs where the companies will be able to check before investing in various technologies related to the circular economy. Also, we were successful in including this project in the Recovery and Resilience Facility. And lastly, this project will employ European Digital Innovation Hubs (EDIHs) as vehicles for implementation”, says the representative of the Industry 4.0 Policy Division.

The discussion is a part of the “In4Act” project, implemented by the Kaunas University of Technology School of Economics and Business researchers and financed by the European Union project “Horizon 2020”.