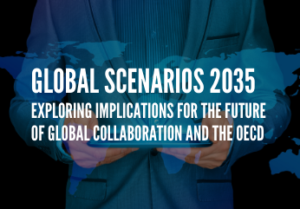 In 2021 the global economy as well as the political and regulatory structures that govern it are at a historic crossroads. COVID-19 has brought about disruption and heightened uncertainty with respect to future trajectories of changes such as digitalization and related technologies associated with Industry 4.0, geopolitical realignments, rising social inequalities and fragmentation, environmental crises and new threats to democratic governance. In this context, organizations of both private and public spheres around the globe face the challenge of modernizing and adapting to remain relevant, without knowing what the future will look like or entail.

This OECD report explores key drivers of change that could significantly affect the future of global collaboration in public policy. For instance, geopolitical realignments and intensified competition may undermine trust just as emerging risks to humanity make global collaboration more essential than ever. The growing centrality of digital technologies may lead to fragmentation resulting in regions and countries developing separate digital ecosystems, threatening existing interconnections and interdependence between states. Platform companies are gaining significance in – and influence over – human lives, and may be poised to play an even greater role in shaping global standards and societal outcomes. Accelerated uptake of virtual reality could create new patterns of human settlement and interaction, and foster new powerful social movements and identities. Lastly, an emerging bioeconomy and circular economy may transform global value chains, while a rapid expansion of private sector involvement in space opens new areas of economic activity.

The report presents three scenarios of the ways the world could be significantly different than expected in 2035.